One of the most famed people who lived in Canaan were the Philistines, or Palashtu.  The Philistines were particularly famed for being enemies with the Israelites, however, they were much more than this.

The Philistines themselves were not from Canaan originally.  They appear to have come from somewhere west of Canaan, possibly Kaphtor (Crete) which is mentioned as the traditional first home of the Philistines.  Disaster in Crete forced the Philistines and several other groups- including the Shekelesh, the Tjeker, the Lukka, the Ekwesh, the Deyen, the Weshesh, the Teresh, and the Sherden- out of their former homeland and across the sea in search of new land.  These peoples together were referred to as the Sea Peoples, and it is they who destroyed several Canaanite cities in the north, including Alashiya in Kittim (Cyprus) and Ugarit in northern Canaan.  They began to move south into Egypt, where the Philistines are known as attempting to establish colonies in the north.  However, the Sea Peoples were driven out of Egypt and defeated by Pharaoh Ramses III.

The Sea Peoples continued to search for their home elsewhere.  The Sherden ended up in Cyprus and eventually in Sardinia.  The Teresh ended up in the Anatolian city of Tarusha, as it was called by the Hittites, and known by the Greeks as Troy.  They may also be ancestors of the Etruscans.  The Lukka became the Lycians.  The Shekelesh became the Sikils of Sicily, the Ekwesh became the Ahhiyawa Greeks.

The Philistines though, settled in southern Canaan.  The area that became known as Pelest was bordered in the south by desert, in the west by sea, in the north by the Yarqon River, but with no fixed border in the east.  It was the land of Gaza, and there were five cities which the Philistines sacked and conquered: Gaza, Ashkelon, Ashdod, Ekron, Gath.  These areas were protected by a strong military, which the Philistines possessed.  The Philistines were famed for their skills in war, and their love of battle is well-documented.  Their land included areas of desert, but also of fertile plains and forests, where agriculture could be used for trade and commerce.

Philistine art consisted largely of pottery, which was coloured black and red.  Their buildings were often huge and constructed around a hall with a circular hearth.  They had markets, temples, fortresses and great buildings surrounded by huge city walls.  They were fond of drinking and huge feasts, and enjoyed songs and entertainment.  They were one of the most advanced cultures, especially in terms of war.  We can see that they butchered and ate dogs and pigs.

The Philstines were worshipers of Dagon, who was their major god and they had a covenant with him.  At Ekron, Baal-Zebul was the main god.  A goddess called Piytna was an ancient Philistine goddess also worshiped here, and she may have been identified with Pidray, Baal's daughter.  The Philistines had no king, but their five city-states were ruled by a lord (called a seren), and all five of these lords (serenim) would meet in a council to discuss political affairs.

The Philistines eventually were conquered by the Assyrian Empire, and later the Babylonian and Persian Empires.  By the time of the Macedonian Empire and the Roman Empire, the Philistines were no longer their own group of people, but were now mixed with the Israelites.


Below are some images of Philistines found online (most of them modern, though a few ancient ones are present).  Notice their distinct headress and armour: 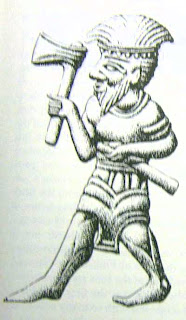 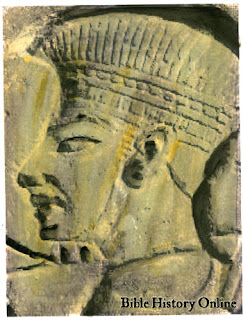 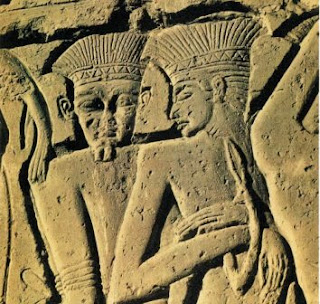 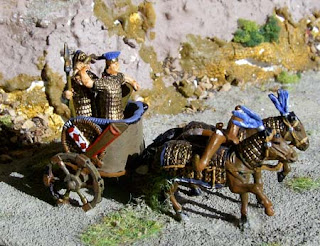 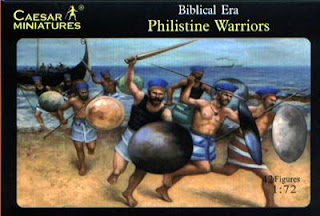 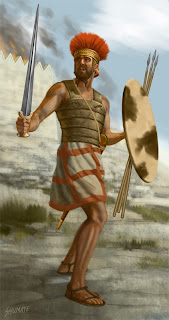 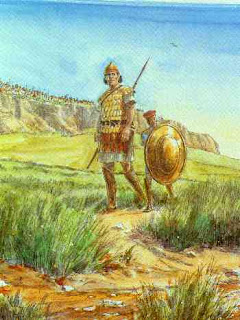