Bat-Zabbai was a woman living in Serug during the 3rd century A.D, living in the city of Tadmor.  She claimed various royal ancestors, including Queen Dudu of Qart-Hadasht, Queen Cleopatra VII of Egypt, and various Seleukid and Ptolemaic rulers.  Her mother's line went back to Egypt (she had knowledge of the Egyptian language), and her father (Amr ibn al-Zarib) was the sheikh of the Amlaqi tribe, who were one of the four original tribes of Tadmor, and they may be the same as the Amalekites.  When her father was killed by members of the rival Tanukh tribe, she became their new leader.  According to many this meant that she was also of Arabian descent.  Her family had been granted Roman citizenship.

Bat-Zabbai was a very beautiful and intelligent woman.  She was dark-skinned, with pearly white teeth, and black eyes.  She was known as a chaste and virtuous woman, though she also behaved somewhat like a man, going hunting and riding and drinking with her officers.  She was friends with many poets and philosophers, and also with the Jewish rabbis.  She was fluent in Aramaic, Egyptian, and Greek, and was familiar with Latin.

Bat-Zabbai eventually became the second wife of the King of Tadmor, Odainat (called Septimius Odaenathus by the Romans).  King Odainat had already had a son by his first wife, called Hairan, and with Bat-Zabbai he had another son named Wahballat (Septimius Vaballathus Athenodorus).  But Odainat and Hairan were assassinated, and so Bat-Zabbai took control of Tadmor as Wahballat was only a year old.  At this time, Tadmor (Palmyra) was a powerful and prosperous kingdom.  Bat-Zabbai's goal was the protect the Roman Empire from the threat of the Persian Empire (Sassanid Dynasty), though her own kingdom gained power through her many conquests.

With her empire expanding, Queen Bat-Zabbai and General Zabdas conquered Egypt with the aid of their ally Timagenes.  She captured and beheaded the Roman prefect of Egypt, Tenagino Probus, and then proclaimed herself as Queen of Egypt.  She then went north and conquered much of Asa (Anatolia).  Going south again, Bat-Zabbai conquered the rest of Serug, Canaan, and Israel.

The Tadmorite Empire, which had by now taken most of the Roman trade routes in the east, came to the attention of the Roman Emperor, Aurelian, who returned and fought against Bat-Zabbai's army near Antioch.  Defeated, the Tadmorites fled to Antioch and Hames (Emesa).  Bat-Zabbai attempted to remove her treasury, but the Romans besieged the city.  With the help of the Sassanid Persians, Bat-Zabbai and her son Wahballat fled on camels to the Euphrates River, where they were captured by Aurelian's men.  All the Tadmorites who refused to surrender were executed instantly, one of them being the sophist philosopher Cassius Longinus.  Bat-Zabbai and Wahballat were taken to Rome.

Wahballat died on the journey to Rome, however, Bat-Zabbai was taken and put in golden chains.  None know what happened to her after that.  According to some, she was beheaded or died of hunger or illness.  But according to others she was set free by Aurelian and married a Roman governor, going on to have more children- and there is some evidence for this. 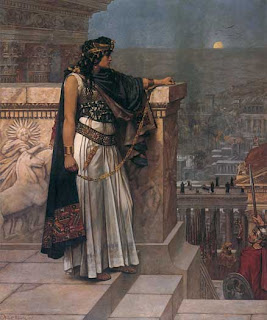