The relationship between gods and mortals, or the need of sacrifice

(Please note, I will be discussing sacrifice and offerings in more detail in a later post).

I realize that it's been a long time since I last posted anything here, so I will now discuss something that is a rather controversial topic.  That is the relationship between gods and mortals.  This is where the Canaanite concepts differ vastly from the Greek and others.

I have often been met with negative reactions by others when this is stated by a member of the Canaanite community.  The people who seem to take the most issue with this is a small minority of Hellenists who are culturally unfamiliar with the Canaanite concepts of divinity and sacrifice.  I have, unfortunately, heard this idea dismissed as 'hubris', 'neopagan drivel', 'arrogance', 'demeaning to the gods' etc.

First, just to clarify, I do not believe that the gods require humans in order to exist.  That would be simply absurd.  The trouble is that they have a busy task running the universe and so it can be hard for them to provide themselves with food and drink, clothing and homes.  It's not impossible for the gods to build their own homes and make their own food (in fact the Qabirim did this, by building a temple near Mount Zapan).  And the gods themselves supposedly built their own cult cities long ago.  In particular, Gebal, Jericho, and Tyre are very old cities seen as having divine origin.  The trouble is, it can be difficult for them.  If Baal was preparing offerings for all the gods, who would send the rains to earth?  There would be drought and water shortage.  If it was Shapash, there would be no sun shining in the heavens.  The whole earth would fall into a state of chaos.

The gods are pictured like human beings, only larger and more powerful.  They exist in the universe, they have thoughts, hearts, and souls.  They require feeding.  Offerings will strengthen the nepeshim (souls) of the gods, it will make them grow stronger and more powerful.  And in return they will bless us.  This is the idea of a covenant, in which both sides- mortal and divine- must do their part.  In doing so it strengthens the bond between the gods and mortals, heaven and earth, and creates a sense of community between us all.

One argument I commonly hear against this is that it reduces the deities to the role of 'slaves' to us mortals, stating that they 'need' us and rely upon us to do everything.  Or that it is mortals arrogantly placing themselves on an equal level or even above the gods.  This is ridiculous.  A king, preoccupied with ruling the city and his kingdom from the royal palace, needs his servants to do things for him.  He needs them to play music for him to uplift his mood, he needs them to prepare food for him, and to give him his cup of wine.  He needs them to arm him with weapons and bring him his horse before battle.  He needs them to do this because given all of his royal duties and tasks, it would be impossible for him to do all of this by himself.  His has more important things to do, but the mundane tasks are not to be neglected, but rather left to the palace staff.  He needs his servants.  But does that honestly mean that his servants are on an equal level or even above him?  Is it arrogance to insist that he 'needs' servants?  No, it's simply reality.

So, hopefully that will explain the Canaanite point-of-view concerning this.  It is obviously very different from the Greek, but it does share similarities with the Egyptian and Sumerian. 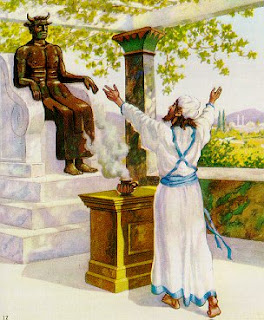