It's no secret that Christianity borrows a lot from Egyptian, Canaanite, Babylonian, Persian, Greek, and Roman etc. religions.  The architecture of the Christian church also mirrors that of the Canaanite temple.

Firstly, I should point out that early Christianity thrived alongside polytheism in the cities, with many of them having their own bishops.  It wasn't until some time during the late Roman and early Byzantine periods that the government officially adopted Christianity and abolished the 'pagan' cults.  Prior to this, the polytheists and Christians mostly lived in peace, though there was occasional conflict.  This conflict was mostly due to religious persecution on behalf of the bishops, though there are also stories of the polytheists persecuting the early Christians as well (though I'm not sure yet how accurate these stories actually are).  In Caesarea, there was a bishop appointed, and many converted.  In Gaza too, the bishop Porphyrios ordered the destruction of the temples of the gods Shamash, Atar'atah, Resheph, Kore, Hekate, the Gad of the city, a hero, and Marna.  John, archbishop of Constantinople, entered the cities of the Canaanites with a group of zealous monks and destroyed the temples of the gods.  In Baalbek, the final polytheists of the city were crucified.  Many books and works of literature were destroyed as works of magic and sorcery.

Since Christianity sprung up in the area, the traditional architecture of churches was retained from Judaism and the Canaanite temples.  I'm here going to break it down, to show the different parts and how they match together.

Firstly, we have the grassy area or courtyard of some sort which usually stands in front of a church entrance:
This area for Christian churches is usually just a small place to prepare for entering a sacred space.  It's very rare that any outdoor rituals of any kind will ever be held there.  In Canaanite temples, this area is where the outdoor altar will be located.  Temples are not churches.  The inside is usually off limits to the public.  Instead, most rituals will be held outside in the front courtyard or garden area.  This altar is a public altar, though it exists within the temple grounds.


Before we move inside, it's worth noting the large steeples and spires which usually stand out on a church from a distance: 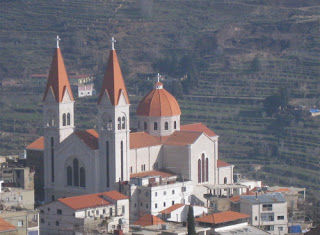 These church steeples often resemble the towers which might be incorporated as a feature of Canaanite temples, such as Baal's at Ugarit.  Other towers can go up quite far and have a large staircase leading up to the top on the inside.  In both cases- temple and church- it's often used so that it is reaching closer to heaven and to God.


Then we come to the entrance itself:


The entrance is often elaborate and you may have to climb up some steps to get there.  To either side of the entrance can be seen two columns.  Some churches also incorporate Grecian structures above the door, which are also found in Canaanite temples.  That specific design is very common in temples from the Roman period.


Inside the church you'll often find a long hall, or main area.  Canaanite temples are very much the same:

In addition, you might see in a church many designs and motifs on the walls or the stained glass windows.  Many of the motifs are also found in Canaanite temples, due to biblical stories being derived from Canaanite mythology.  You will see shepherds, lions, cherubim, angels, the Tree of Life, the mother (Mary and Asherah), the Garden of Eden, the old God in the heavens as the 'Ancient of Days', etc.  Churches though will often fill this space with pews, benches for the worshipers to sit upon.  There are no pews or a pulpit in Canaanite temples, as it's usually only the priests in this area.  There are also no sermons in temples.


Finally, there is the inner sanctuary, or the Holy of Holies: 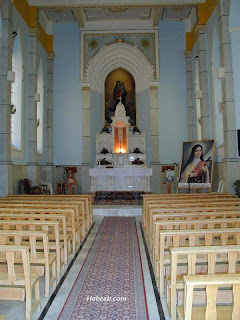 This is the area where you'll find the altar, in both cases.  Behind the altar there is usually always a cult statue, of either a deity or Jesus/a crucifix.  In Canaanite temples it's usually curtained off though because this is where the god actually lives.


There are a few other features they might have in common as well, such as smaller side chapels and statues and bells to ward off evil spirits.
Posted by Benel at 08:19