My experiences and interactions with Spenta Mainyu

Canaanite religion allows for worship of foreign gods.  These gods are sometimes identified with Canaanite ones, and are sometimes only associated with them on one level, and are sometimes treated differently.  But in any case, they are worshiped in the Canaanite manner (often outside of a formal, state, temple context).  For example, I might make offerings to 'Kassite Yarikh' (the god the Kassites call Shipak), 'Elamite El' (the god the Elamites call Khumban), 'Arabian Shapash' (the goddess the Arabs call Shams), 'Egyptian Ashtart' (the goddess known by the Egyptians as Aset), or 'Babylonian Yarikh' (the god called Sin by the Babylonians).  And other times I might worship them as part of a formal religion, in temple or public ritual context.  Bes from Egypt, Demeter and Kore from Greece, Dionysos and his companions from Greece, and others are well-known deities who originally started off in 'foreign' religions or cultures.  Ugaritic tablets contain countless deity correspondences lists with the Canaanite and Sumerian gods.  Indeed, the two famous Neoplatonist philosophers, Melek and Ya-milku, were personal devotees of Mithra and Osir-Api, respectively.

All of this is relevant to an experience I have been having very recently.  In an informal and non-state religion context, I have developed a relationship with Spenta Mainyu.  Who is Spenta Mainyu?  Spenta Mainyu is an Amesha Spenta, in other words, one of six great Persian divinities.  These are considered to be part of Zoroastrianism, and are the highest class of yazatas, or divinities, and are part of Ahura Mazda's good creation (and are in fact, inseparable from it).  The empire of the Medes and Persians did conquer Canaan once, in ancient times, and so certain Persian influences over the religion begin to appear, but this is the first time I have ever addressed prayers to a divinity from the culture and religion of the Medes and Persians. 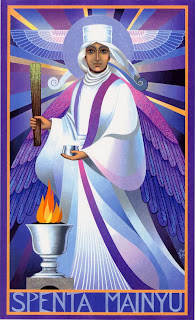 Now obviously, my worship of Spenta Mainyu is not a part of official state religion, but as an informal household practice, it works very well.  It is also because of a sense of inner devotion to such a holy being as Spenta Mainyu.  How did this devotion come about?  To explain it will not be easy, but I will try.  First, let us take a look at Spenta Mainyu's role in Zoroastrianism and Persian mythology.  He is the Good Spirit.  His actual name means something like: Good Spirit, Good Mentality, Creative Spirit, Progressive Spirit, Bountiful Spirit, Progressive Mentality etc.  A spirit in Persian religion can be termed a kind of consciousness or mentality that can be found anywhere in Ahura Mazda's creation.  There are spirits who control the nature around us, and there are spirits who are found within us, human beings.  We have mentalities within our head- both good and evil.  We have thought processes and ideas.  These conscious and free thoughts are called 'spirit' or are under the domain of 'spirit'.  Spenta Mainyu is what Ahura Mazda creates the world by, and continues to change it for the better.  But there is a catch.  Spenta Mainyu is in a struggle with his dark 'shadow' opposite, emerging from druj (the force of evil in the cosmos, opposed to asha, or goodness).  This is Angra Mainyu.  His name means something like: Evil Spirit, Evil Mentality, Destructive Spirit, Destructive Mentality etc.  This is all negative and toxic thoughts which poison the mind with bad ideas.  Spenta Mainyu creates, while Angra Mainyu destroys.  You have a choice over which spirit your prayers and sacrifices go to: whichever one you *choose* to 'feed' with your offerings and deeds.

There is a Hell, called Duzanghush, which means something like a 'diseased existence'.  It is a state of being and a state of mind, both in this life and after death.  You choose, through your own free will, to remain trapped in Hell until you decide to free yourself.  It's a type of bad consciousness, and you remain there through your own thoughts, words, and deeds.  That is until the Frashegird (enlightenment, when all evil melts away).  This is a concept of 'enlightenment', when the soul becomes free of evils, begins to see and self-evaluate itself, and can then leave a hellish state of being and mind, and can cross the Chinvat Bridge (the bridge of consciousness), guided by the yazata Sraosha (guardian of the dead, and a force of inner devotion and prayer to God) until it reaches a blissful state of being, or Paradise, called Vahishtem Manoo.  This is all cyclical, and will happen to everyone eventually.  But they will only realize it or reach it at different rates and so will arrive there at different times.  But those who seek enlightenment and wisdom will find it in this life.


Now I'm going to tell you about something which is completely different, but still ties into the same idea.  I am not a Persian, not a Mede, and not a Zoroastrian.  However, I am a student of the ancient philosophers (and some modern ones as well), and I regard true knowledge as not being bound by caste, creed, or culture.  Socrates, Platon, Aristotles, Ptahhotep, Plotinus, Melek, Ya-milku, Julian the Chaldean, Buddha, Charvaka, and Zarathushtra all have something wise and important to say, regardless of whether your accept it all or not (and I certainly don't accept everything written by all of these philosophers, but there are times when I can look at their arguments- even if I disagree with them- and still see something wise or rational in them).

There are times when I can become angry.  I can say things that I regret saying, and wish that I never said them.  But I cannot undo the mistakes of the past.  Instead, I have to learn from them.  But I keep falling back into this sudden and irrational display of passion, perhaps due to an overbalance of yellow bile and the choleric temperament within my physical body.  In many regards, I can identify with the legendary hero Samson of the tribe of Dan, who was gifted in fury- but his gift was also his curse.  I keep falling into a very irrational, angry, and evil mind when provoked by others.  And at a point recently, I came to the realization that I've had enough of it all.  I needed guidance- spiritual guidance or divine guidance.  That was when I felt him.  A creative and joyous presence.  A one of wisdom, teaching me to follow the right path and learn to meditate to overcome my feelings.  A one which taught me to just relax sometimes, and think of the simpler pleasures in life, and how even small and beautiful things can make me calm and able to avoid anger.  It also taught me not to be so cynical all of the time, but to take joy and peace at even the smallest things.  This is the side to me that I want to see all of the time.  It was more than just an emotional response which comes and goes when needed.  This is a real spiritual experience.  This was good spirit in contrast to evil spirit, creative spirit in contrast to destructive spirit.  As a mere mortal, I am incapable of doing everything alone, and I recognize this.  So I began by saying a prayer to Spenta Mainyu, and reading part of a Gathic hymn to him.  And this is my story on how a divinity from another tradition can become a part of my informal and household private devotion.
Posted by Benel at 19:11