The Ashtart Pericope is something found within Neoplatonic philosophy from across the land of Canaan in late antiquity.  It was detailed by the philosopher Hakham Ya-milku of Qinnashrin, and mentioned by Emperor Julian in his Hymn to King Helios.  It's origins though are very old, perhaps going back to early Canaan in Sumerian times.

This system goes something like this: above us we see the light from the sun, the Torch of the Gods, Shapash.  It is a perfect white light which when fractured creates a rainbow spectrum.  This light is so perfect that it brings to perfection both the forms and the being of all created things.  And as we have seen from popular proverbs and sayings, all created things on earth exist 'under the sun', the all-seeing sun.  We are below the sun.  But Shapash herself does not cause this perfection to exist by herself, rather she uses the noetic or intelligible gods to do so.  It is Shapash who grants these gods their goodworking and perfect nature, and it is she who allows them both the think and be thought of.  This makes sense because we know that Shapash is the Source of All Intelligence.

For years, the priest-kings of the city of Homs (two of whom were named Ya-milku) kept a kind of solar theology on their tablets for the worship of the goddess Shapash.  These were an elite group.  Ya-milku of Qinnashrin was himself descended from this royal line, hence his name.  When he went to study Neoplatonism, he mostly had the solar theology in mind.

Now, Shapash has placed the army of the heavens under the goddess of Forethought, who fills the heavenly spheres with purpose and bestows upon humanity wisdom, thought, and the arts.  This is interesting, because it is Shapash's own Forethought which allows her to bring perfection to the forms and beings of all things through the workings of the intelligible gods.  Shapash emanates the pure light, being given the central role in all creation.  Her rays of light come from heaven and emanate pure mind from the divine to all of the created things on earth under the sun.  That is how their souls are enlightened, receiving an emanation of thought from heavenly mind.  But how do her perfect rays reach the earth from heaven in an uncorrupted state without first becoming corrupted as they travel on their descent?  The answer is through the intercession of the goddess Ashtart.  Ashtart is close to Shapash, because she is the Morning and Evening Star, in other words the planet Venus.

This planet is close in heaven to the sun, and so it is through her intercession that the heavenly light from Shapash descends to the earth in a completely pure and uncorrupted state.  Ashtart is said to be 'always charming', because she is a mediator who brings forth the divine wisdom from God to the creation, from heaven to earth.  When we receive the divine rays of the sun, which awaken our souls and allow us to connect with divinity and to 'realize' divinity (gnosis) we are receiving it by the grace of the holy Star of Venus, the Morning and the Evening Star, the goddess Ashtart, who carries the rays through heaven and ensures that they reach earth in a pure and uncorrupted state straight from divinity itself. 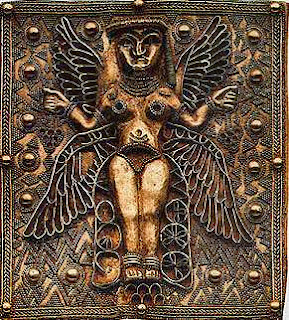