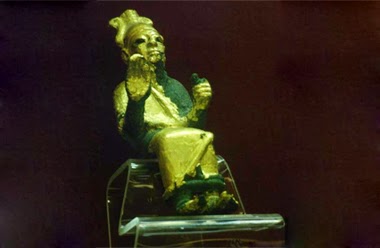 El (meaning 'God') is the highest god, father god, and King of the Heavens in the Canaanite pantheon.  In Canaanite religion, he is the creator of the heavens and the earth, under his epithet Baniyu Banawati (the Creator of Creatures).

El is called the Ageless One, and is also called by the epithet Olam (Eternal).  He is Elyon (the Most High), and ruler of the elohim, the gods, who number 70.  El presides over the Divine Assembly as the patriarch and elder.

The early creation myths say that El came to power as leader of the younger generation of gods, under his father Shamem, in whom he made his heavenly dwelling with the gods.  He carried off heaven and held him above earth.  Still other myths imply that El preceded the heavens and the earth.

El resides atop Mount Kasu in the Hammon mountain range between Canaan and Khilikku in the Hurrian parts of Anatolia.  He dwells in a tent, or else in a palace behind seven doors, at the source of the two world oceans.  Occasionally he is visited here by his consort Asherah, who rides on a donkey.  But El is very far away, and has lived here since creation.  His remote location makes him seem distant in the lives of mortals.

He is portrayed as an old man with white hair and beard.  This shows his endless wisdom as the universe's supreme creator.  He wears robes and a tall crown or hat.  In his hand he carries a cup of wine and raises the other hand in a blessing, granting long life and a life of good fortune to his devotees.

El is described as a benevolent and kind god, very slow to anger.  His mercy is infinite, and he is called Kindly El the Compassionate (Lutipanu ’Ilu Du Pa’idu).

He is the Father of Years (Abi Shanima), and is associated with the Bull as a sacred animal of kingship, being called Bull El or Thoru Ilu.  El is a drinker of wine and a lover of banquets, and he dines with the gods his children.  He is their father, the father of all mortals, and of all creation.  All of the gods bow to his authority, and his word is absolute, establishing with it the natural laws of the universe.  He also concerns himself with kings, anointing them with olive oil.

Other texts describe El as having four eyes, two opened and two closed, so he can see even while resting or sleeping.  This is because El is all-seeing.  He also has four wings, so he can rest with traveling.  Upon his head are two more wings, one for the ever-ruling mind and the other for sensation.  These were a gift to him by Baal Ta'awat, and he was pleased with these.

Despite his remoteness, El does communicate through dreams.  His worshipers, the Elohists, worship El as supreme.
Posted by Benel at 09:58