My recent visit to the doctor and to the houses of healing (nothing serious just a checkup) prompts me to now write on the healing god, patron of doctors, physicians and healers.

Eshmun's name means 'eight', and the reason for this given by Sakkun-yaton is that he was the eighth son.  His father and mother are Resheph and one of the Kathirat goddesses.  Their first seven children were known as the Qabirim, and were ugly and monstrous.  But Eshmun, the eighth, was handsome and youthful.  He was the desire of many goddesses.  Also, Eshmun was said to have been born on a heap of ashes.  While out walking one day, the goddess Astart spied him and gave chase in an attempt to seduce him.  Eshmun ran to the Awali River before the goddess caught up to him.  Out of fear and sudden panic, Eshmun took a knife and castrated himself, cutting his genitals off and throwing them onto the ground in that area.  However, the young god bled to death as a result of his action.  Astart carried the dead god into a nearby cave and restored him back to life with her power.  Arisen once more, Eshmun became an underworld god.

The site where Eshmun castrated himself and died is where the city of Sidon was built.  Astart became the goddess of the Sidonians who lived there.  On the banks of the Awali River is where the famous healing temple to Eshmun was built.  The cave, located near to Sidon, became an important cultic site, where pilgrims would go and bathe in the sacred waters to be cleansed of illnesses (there are still legends surrounding it today).

There are numerous explanations for this story.  One of them involves an astrological explanation.  In this explanation, the Deer constellation represents Resheph, who is shown as a deer.  The Arrow represents the heap of ashes (connected to a burning pyre) where Eshmun was born.  The Abyss represents the cave where Eshmun's devotees discovered the sacred healing pools.  Another explanation is about the cultic functions of Eshmun's priesthood.  Some of his priests were eunuchs, which explains Eshmun's castration (in the past, when castration was done with a knife to the genitals, there was a much higher risk of death).  The sacred mystery cult of Sidon is also connected to this legend, as are the Sidonian schools of thought.

Eshmun is the god sacred to physicians, doctors and healers.  He is often worshiped alongside his father, Resheph, and with his servants, who are healing-gods or demons of the underworld.  When a sacrifice (usually a sacrifice of boar or pig, offered to chthonic gods) is offered to him, it must be wholly consumed and burnt.  Nothing of it must remain, or else it will attract demons and unclean spirits.

Eshmun is a dark and distant god.  He is feared by mortals, but well respected because of his healing abilities.  He can be symbolized by his rod, the Rod of Eshmun or the Nehushtan (a bronze serpent on a pole), which can be worshiped in its own right when in need of healing.  He is perhaps somewhat more distant than his father Resheph, and unlike his father is not actually responsible for spreading disease.  Instead, he only has domain over healing.  He is not the god he once was in this world, but is now an underworld god and a god with the mysteries of healing and of life and death.  He has gone to the underworld, and is now devoted to his duties as a healer.

Pray to Eshmun when in need of healing or when visiting the doctor.  If you ever need to heal anyone yourself, either as part of your profession or if simply needing to do it, offer him a prayer.  When in need of a cure, sleep in his sacred temple so that you have a prophetic dream.  Followers of the Sidonian schools of thought or of the Sidonian mystery cult are among his devotees.  There is not really anything else he is worshiped for apart from healing. 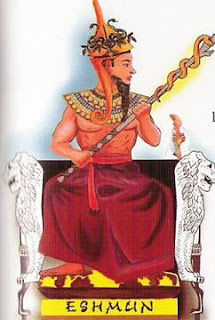 The image of Eshmun seen above shows him holding the Nehushtan.  Though Eshmun is usually shown as beardless (as he is a youth).  Here is my image: 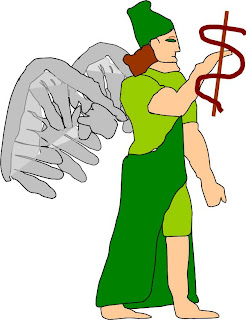