Typical Features of a Canaanite Town

I decided to lable some typical features of a Canaanite town or city.  Many of them may still be found in most towns or cities today, so this can be a useful guide to the naming of them and concepts associated with them in Canaanite culture.

- Bet (house):  This is obviously the dwelling of the Canaanite.  Houses were often made in ancient times from mud-brick and built with a flat-roof.  They often had a courtyard or garden in the front, which is where any animals might be kept, or just for storage space.  Houses were often small and had only several rooms.  Often the doorways were constructed as archways.  The houses could be one to several stories high, sometimes becoming apartments with people living above or below.  Today, a Canaanite's house is where he or she lives, sometimes with their family.  It is where most daily activities take place, as well as some worship.  My own house is two stories high and built of brick, with a walled garden on the front side.  Inside, a stone arch leads from the kitchen into the living space.  Upstairs in my bedroom is where my two shrines/altars stand, to the household gods and to the Rapi'uma.

- Merkaz (civic centre) and Shuq (market-place):  The Merkaz can best be described as the Canaanite equivalent to the Greek Agora and Roman Forum.  It is a place where people can meet, buy and sell, and trade.  It is often a large part of the community, more so in ancient times than today perhaps.  A shuq (market-place) is often set up around the Merkaz, as well as several important buildings like shops.  In ancient times, there was often a building in the street running alongside the Merkaz which was where the city council would often be held.  The mayor or govenor, often appointed by the king, might often reside here or near here.  Also, many northern cities (especially in later times, during the Iron Age), eventually adopted a council of shoftim (judges) who made decisions based on the demands of the people.  Their head was the king, though in later times the king ended up with a more ceremonial role rather than an active or political one.  These shoftim would judge and sort out disputes in the streets surrounding the Merkaz.  Today, there are two types of Merkaz.  One is the local public square, often in the town or city centre, where markets are often held and there are many shops.  There is a Merkaz built on the hills near my house, where there are often markets.  Another type is an online forum where discussions among the Canaanite community are held.

- Achuzah, machzabah and refet (farmstead, mill, and corral):  These would be found in Canaanite farms, where farmers would provide their kingdom's capital city with agricultural produce, and rear domestic livestock to be donated to city temples for sacrifices during festivals.  They would be more common in villages and smaller towns which tended to surround a large city.  The farmers here would be under the domain of the city, which would be the capital and where the king would rule.  Sometimes entire tribes would have villages which were owned for by the larger cities.  An example would be the Perizzites, who were mostly rural people inhabiting small villages and towns, providing for the Canaanite cities.  Though Canaanite culture is often two-way, with the concept of covenants or deals being an ancient one.  While farmers would be lower down on the feudal/caste/class system than city-dwellers, and would have to provide a large amount of food for them; in return, the farmers were under the city's protection and could flee there for sanctuary during attacks.  Today, there are still many farms and smaller villages which surround large cities.  I live in a village myself, with a few farms and fields surrounding it.  It is built with several others near a city.  Basically, we should be thankful for these areas as providing for us with our food and animals for sacrifice.

- Chamet (fortress or citadel):  Large fortresses, citadels and castles were built by the Canaanites to keep their cities protected from attack.  They were often built on large hills in the centre of a town or city.  It is here that the citizens would flee in times of attack or during a siege, and where the soldiers would make their final stand if they were losing.  The fortresses often appeared 'monolithic' and block-like, like giant stobe cubes with ramparts along the top.  Today, it is rare to have fotresses or castles (the only ones standing being historic sites), as it is unlikely that our towns or cities would ever be besieged or attacked.

- Maqdash (temple) and tophet (burning-place):  Temples were large and elaborate buildings for the Canaanites.  They are considered the houses of the gods.  A temple in ancient times is largely the same as one today.  It is the house of a deity, and when visiting it a Canaanite pays respect to that deity in worship, or by bringing sacrifices (especially during festivals).  Temples often have an outdoor courtyard, then an indoor shrine room where the idol is housed on a large stone altar, often behind curtains in a 'holy of holies'.  Temples largely resembled Solomon's temple in ancient cities like Tyre.  Priests and other temple staff spend some of their time here.  A tophet is where fire offerings are held.  A tophet building in ancient times would be large and built of white stone, displaying images and symbols of the deity on the walls.  Outside would be a graveyard for children, who were sometimes cremated and 'given back' to the deity, rather than buried in their family tombs.

- Machanet (barracks):  Barracks were stone buildings where the army would gather and train.  Swords and shields would be stored here, as would training dummies or anything else needed as part of the soldier's training.  Today, any military compounds or bases would count.

- Hekal (palace):  The palace was the house of the king and the royal family.  It would be a stone building, large and elaborate, flanked by pillars, with a courtyard and gardens.  There would also be many commoners found in the palace, including weavers and servants, as well as many slaves and attendants.  Today, any government building might count, and the house of a member of the Canaanite community with a leader role or important role might also count.

- Jdar, mijdil, and mijdil-shaar (city walls, wall turrets, and city gates):  Canaanite cities and even towns would often be walled and built atop a hill or mound.  This was for defensive purposes.  Walls were large, often described as reaching to the heavens.  They would have ramparts and battlements on the top.  The walls would have occasional towers built at intervals along them, and there would be large gates leading out of the city.  Canaanite walls shared a lot in common with Assyrian, Babylonian and Egyptian walls in terms of architecture.  Today, it is rare to have city walls for the same reason it is rare to have a fortress or castle. 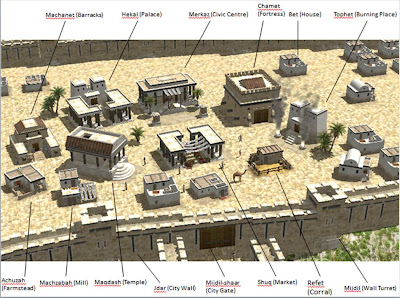