Another example of bad history

Another misconception among many pagans involves the Library of Alexandria.  This was a great library which was founded in Egypt in the city of Alexandria by Alexander himself.  After conquering Egypt and Assyria, Alexander planned to build his own library in Egypt which was inspired by the Library of Nineveh (built by King Ashurbanipal).  In time, this library grew to become famous in the ancient world.  Many books and works were housed here.  These included works of astronomy, physics, natural history, history, and theological works.  Among the authors were probably the likes of Platon, Aristoteles, Aristarchus, Bel-re'ushunu, Ma'at-ni-Tehauti, Philon, etc. 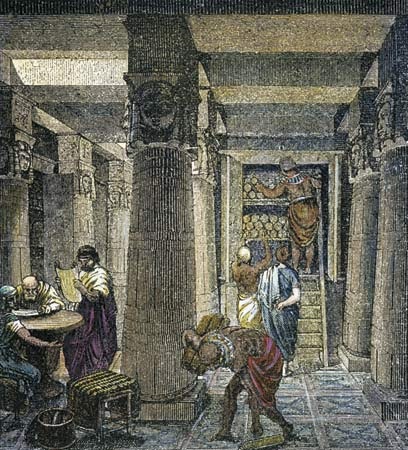 It was famed throughout the ancient world, and especially among the Egyptian, Greek, and Roman intellectuals who lived in Alexandria itself.

The problem comes in when the following 'facts' are often assumed about the library:

- That the library was destroyed by a Christian mob
- That this supposed event was somehow 'linked' in some way to the death of Hypatia, and it was all to do with the fact that the Christians of the time feared knowledge and learning, associating it with witchcraft
- That most knowledge was destroyed with the destruction of the library
- That said destruction of knowledge led to the beginning of the 'Dark Ages' and set science and development back many years

To begin with, how was the library destroyed?  Most likely by the Romans during Julius Caesar's invasion of Egypt in the days of Cleopatra.  This is probably true because there is no mention of a library anymore after this time.  At the time when Hypatia was living, exactly no contemporary historians ever so much as hints at destruction of a library.  Also, budget cuts might have played an important part.  The Library was only a part of the Museum, which had been funded by the Ptolemaic kings, and after that probably by the Roman governors who were sent to rule that province by the Emperor.  It's fairly certain that the library was not as big as it's often made out to be- even by Caesar's time.  Some ancient historians venture that the number of scrolls contained in the library was about 700,000.  Archaeology has shown that the library simply wasn't large enough to hold that many scrolls.  Plutarch, Ammianus Marcellinus, and Seneca all clearly talk about the library in the past tense (implying that it no longer exists) and all of them describe it as being destroyed by Caesar.  Seneca even confirms that many scrolls perished.  Ammianus Marcellinus writes of Alexandria that "in it have been valuable libraries", obviously not talking of the library in the present tense. The reason that no earlier historians mentioned it was because while Julius Caesar's family occupied the throne it would have been dangerous for anyone to write anything bad about him.

Since we can discount the stories of the library being destroyed by a Christian mob, we can also throw away the idea that Hypatia's murder had anything to do with it at all.  It certainly can't be seen as one united campaign against all forms of knowledge given that the library wasn't destroyed by Christians and Hypatia's murder must have happened for completely different reasons.


The next part deals with the idea that the destruction of the library somehow set back scientific and technological advancement by years, and brought in the 'Dark Ages'.  Firstly, it's important to realize that it wasn't as if all knowledge only existed inside the Library of Alexandria and nowhere else.  In late antiquity there were many important cities which had schools for learning, aside from Alexandria.  There was also Athens, Ephesus, Tarza, Babylon, Seleukeia, and of course Rome itself.  In fact, most of older historical research could probably be found elsewhere.  Let's examine the Babylonian History of Bel-re'ushunu.  Surely his works would have been in the domain of the Babylonian priesthood, and not solely found in Alexandria?  It's true that while there's no evidence of Bel-re'ushunu ever writing on cuneiform tablets (his work was written in Greek and dedicated as an official history to the reigning monarch of the time, King Antiochus I Soter), he certainly drew upon the archives of cuneiform of king-lists from his temple of Esagila.  These would be stored in the temple archives of Babylon and not in a foreign land (Egypt).  Other writers, many of them Greeks, worked in Athens as well as Alexandria.  Indeed, we have many of the works of Greek writers today with us still.  Ma'at-ni-Tehauti was an Egyptian priest of the sun god Ra, but he came from Tjebnutjer and not from Alexandria.  Still, we know that his work was dedicated to his king- either King Ptolemaios I Soter of King Ptolemaios II Philadelphus.  So her certainly had ties to Alexandria.  It was also he who presided over identifying the protector of the royal household as Osir-Api (after a dream in which the king saw his god coming to Alexandria), and who helped establish his cult in this relatively new city.  But his own work is largely based on Egyptian myth and king-lists which are found on the temple walls written in hieroglyphics.

We also need to examine how biased accounts of the setback of knowledge are on western history.  India and China continued to flourish.  And yet they are often ignored.  In ancient India there were heliocentric models of the cosmos being posited after the library was destroyed (by Aryabhata for example), but they're often ignored by people who argue that destruction of the library prevented science from advancing.  Another thing that people often forget is that in real life, science and technology don't advance like a tech tree in a strategy game (for example Total War or Civilization games), in which you can fund research into scientific advancement which leads to upgraded weapons and technology for your armies and kingdoms.  In the ancient world, science and technology worked somewhat differently than the way they do today.  Technology was in the domain of the artisans, carpenters, craftsmen, blacksmiths etc. who built things.  While natural sciences were the domains of the philosophers and intellectuals who sat around in academies writing books about the universe but not putting it to practical use.  This meant that their findings often went untested.  They relied on pure rationalism but not on the modern scientific method, which is probably why ideas like heliocentricism never caught on properly among the masses, even while Christianity had not yet been born.  It was not until later that people began to combine them together, and that modern science was born.  The roots of science and technology could be found in those days, but we can't make assumptions like "If the Library of Alexandria had never been destroyed, we would have colonies on Mars by 500 AD".  There's little evidence that the people of late antiquity were close to landing rocket ships on Mars and planting thriving colonies there.

There's not much else to point out, other than that most ideas about knowledge going back over after the library's destruction hinges on a misunderstanding of the so-called 'Dark Ages'.  The most persistent misconception is that knowledge of the spherical earth was destroyed in the library, and so people after that time believed that the earth was flat.  This can easily be disproved (search 'the flat earth myth' on the Internet if you want to look).
Posted by Benel at 17:41