What is theurgy, what role does it have in Canaanite religion, and what relevance can it have in our lives today?

To address these three questions, we need to look at context and examine what we know about ancient Near Eastern history.

The Divine Science (i.e what we currently know as 'theurgy') was practiced in mystery schools throughout history.  It was known in the mystery schools of Sidon, Tyre, and Gebal.  It was practiced among the Egyptians, among the Assyrians and Chaldeans, and in the Persian and Median mysteries of Zarathushtra and Mithra.  The mystery schools of Phrygia and Thraki knew of these teachings.  It was the Canaanites who formed the doctrines of numbers and atomism, and the Assyrians who first discovered the triune nature of the soul (divided into physical, mental, and spiritual or contemplative). These doctrines form a powerful part of the religious systems practiced in those lands since early times, and form the basis of what we now call 'theurgy'.

Fast forward in time until very late antiquity in the days of the Roman Empire and we begin to see a division between the Near East and the powerful Greek philosophy.  For the Greeks, understanding of God was accomplished through mental contemplation alone.  This is close to what in India is called Raja Yoga. While in the systems of the Near East, something closer to true Bhakti Yoga was emphasized.  This was through acts of true devotion to God through rituals involving a number of different sacred forms and symbols.  This ritualism united the devotee with God through ecstatic union.  For the Greeks, this was nothing short of superstitious nonsense.  To make matters worse, the Greeks were thoroughly repulsed by what they saw going on in Egypt, in which priests would threaten to devour the gods in hymns.  The Egyptians, in the eyes of the Greeks, were driven by superstition and hubris rather than true piety. 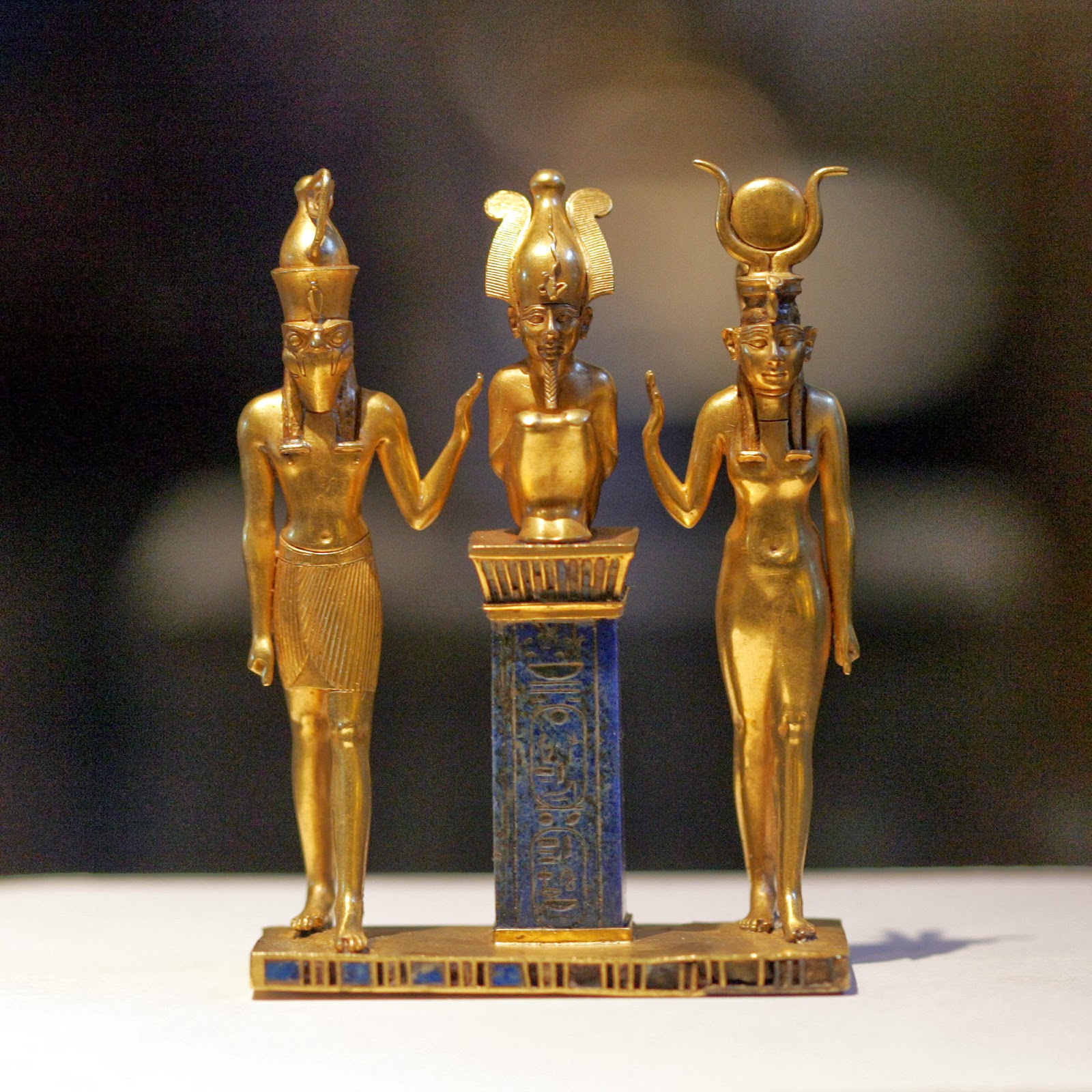 This is when Ya-milku comes in.  This philosopher was a Syrian, a Canaanite from Qinnashrin, and he belonged to the Neoplatonist school.  He studied in this school under another Canaanite philosopher called Melek (known by the nickname 'Porphyrios') in the city of Rome.  At the time, Rome was the most important city in the western world.  But his master, while acknowledging the ancient mysteries of the Canaanites, Egyptians, Ludians, Hebrews, Assyrians, and Chaldeans, seemed to gravitate more towards the Greek mode of thought as he became more learned.  In his earlier works he had defended theurgy, no doubt accustomed to it from his youth in Tyre.  But later he would denounce it.  It was nothing more than irrational superstition, and more than that, it was actually disrespectful to the gods.  How, he asked, could a truly great priest worship the great god Osir by threatening to scatter his body all across Egypt like Set had done?  Mental contemplation alone would lead to the realization of the glories of God.

Ya-milku of all his pupils disagreed, and due to being of similar age they quickly fell apart in disagreement.  Ya-milku returned to Syria and here set about to perform an impressive task.  Firstly, could he harmonize Greek philosophy (that of Pythagoras, Platon, Aristoteles etc.) with the mystery theologies of the Near East?  And could he, as a philosopher, ever hope to rationally justify the practices found in these mystery schools which were commonly dismissed in his day as superstitions?

Two of his works, both written in Koine Greek, answer these questions.  One of them is the 'Life of Pythagoras', which tells of Pythagoras' teachings and his life.  In it, we learn that Pythagoras was initiated into the mystery schools of Tyre, Egypt, Babylon, and Persia.  It was from these that he learned his philosophy.  Therefore, the wisdom of the Greeks and the wisdom of the people of the Near East is not in conflict, but in fact has the same divine origin.

It was from this that Ya-milku derived his teaching curriculum for his own pupils in his school, which would study the teachings of Pythagoras, Platon, and Aristoteles, along with those of Orpheus and Zarathushtra and the Egyptians and others.

His other major work was entitled 'On the Mysteries'.  In it, he details the practices of the mystery schools and their Divine Science, which he calls 'theurgy'.  In the book he answers questions from his former teacher Melek against theurgy, in the guise of an Egyptian high priest called 'Abammon'.  Answering the criticisms of wise and powerful philosophers was no easy task, but Ya-milku eventually succeeded, because most of the Neoplatonic philosophers who followed him continued to follow the practices of theurgy.  No more was this concept attacked.  It formed the basis of Qabalah and the other mystical traditions.  We see philosophy shifting from the pure intellectual to the practical and the ritualistic.

One objection raised is that theurgy is disrespectful to the gods because it is commanding and controlling them.  However, this is not so.  Instead, it is the gods acting through human beings performing the ritual.  The Egyptian priests reciting the cannibal hymns is one example, and another is the Canaanite priests throwing Gardens of Adon into the sea after his yearly death.  The Christian example would be the Eucharist and sacrament, in honor of Jesus' Last Supper with his disciples and which reflects something in comparison to eating the body and drinking the blood of the Lord to remember his sacrifice for humanity.  All of this is basic theurgy, but under no circumstances can it truly be said to be commanding or controlling the gods.  Indeed, any rational person would declare this impossible.

Ya-milku also argues that if mental contemplation alone would lead to union with God, when why don't all philosophers reach it?  Practical action, ritual, and offerings to the gods played an important part in his school and philosophy.

The role that theurgy plays in our lives is to help us realize the divine.  It also provides a reasonable justification for our offerings to the gods.

We need theurgy and the philosophies of Ya-milku today just as it was needed in his day.  For not a lot has changed.  When Ya-milku was alive he witnessed a descent into ignorance and a growing emphasis on materialism over spirituality.  There were wars and destruction.  People questioned why.  As a youth, Ya-milku's town of Qinnashrin was stormed by the powerful Persian Empire.  There was much destruction.  There was a lot of religious upheaval at the time.  The marketplaces and streets of the main cities would be filled with pagans, Jews, Christians, Buddhists, and others- all of them in argument.  There were people who began to question religion after seeing so many different faiths and ideas being presented as truth while all disagreeing.  The great philosophers turned away from priests and temples and sacrifices, preferring instead mental contemplation and pure rationalism rather than religious experience.  Leading thinkers denounced religion in general as an embarrassing relic of the past.  Your average person payed little heed to philosophers and intellectuals, preferring to go about their daily lives and not trouble themselves with something that they didn't understand.  As such they might celebrate major festivals like the winter solstice or spring equinox, but forget about gods and religion for the rest of the year.  There were hardly any true prophets left.  The gods were silent and no longer seemed to be active in the lives of mortals.

For Ya-milku, all of this was unacceptable.  He needed to bridge the gaps between the philosophers and the commoners, the priests and the laypeople.  He needed to provide a reasonable defense for religion in face of an onslaught of militant materialism and 'rationalism'.  All of this is needed in our lives today.  Ya-milku was not interested in simple idle thoughts, but in daily practice and experience.  Trying theurgy will allow you to feel the divine within your life as a daily part of it like anything else you experience on a regular basis.
Posted by Benel at 05:41