The city of Tyre

The city of Tyre was an ancient island city off the coast of Canaan.  It's origins are explained in a lot of myths.  Sakkun-yaton tells us this about the origins of Tyre:


"Shamim-rum and Ushu were the issue of the first men by connexion with their mothers; the women of those times, without shame, having intercourse with any men whom they might chance to meet. Shamim-rum inhabited Tyre: and he invented huts constructed of reeds and rushes, and the papyrus. And he fell into enmity with his brother Ushu, who was the inventor of clothing for the body which he made of the skins of the wild beasts which he could catch. And when there were violent storms of rain and wind, the trees about Tyre being rubbed against each other, took fire, and all the forest in the neighbourhood was consumed. And Ushu having taken a tree, and broken off its boughs, was the first who dared to venture on the sea. And he consecrated two pillars to Fire and Wind, and worshipped them, and poured out upon them the blood of the wild beasts he took in hunting: and when these men were dead, those that remained consecrated to them rods, and worshipped the pillars, and held anniversary feasts in honour of them."
Tyre is also called a nymph, a spirit companion of Melqart, who himself is said to have discovered Tyre.  In fact, it is possible that Sakkun-yaton's Ushu is another name for Melqart, whose birth is mentioned elsewhere.

However, outside of myth, we can see from history that Tyre was originally a colony of Sidon, eventually winning its independence.

Tyre was an island city built out from its twin city, Ushu, which was built on the mainland.  Though the two sometimes warred, they more often were allies.  Ushu benefited from shelter on Tyre, as well as wealth from trade; while Tyre benefited from water, timber and burial grounds in Ushu.  Ushu was built more like a series of streets and houses, while Tyre was the centre of the whole kingdom where most of the kingdom's features were found, such as the palace.  Tyre was built like a fortress, surrounded by thick walls on every side.  This made it virtually impossible for enemies to besiege the city.

Tyre's economy was based mostly on trade with foreign kingdoms.  The southern harbour on the island was for merchant ships sailing to Egypt, while the northern harbour was for sailing to Sidon.

The Tyrians possessed a poweful navy and a small army, sometimes relying on mercenaries from elsewhere.

It was during the reign of King Hiram I, however, when Tyre became wealthy and powerful.  Hiram constructed a fortress/citadel on the northern edge of the city for defense in case of attack.  Between the northern and southern harbours was built a large public square and marketplace.  The royal palace was built near the south of the city.  Hiram also ordered rocks to be brought in to create an artificial island on the southern side of the city.  Once built, Hiram connected it to Tyre.  It was here that the famous temple to Melqart was built.

Melqart was the city's main god.  Other gods worshiped in Tyre included Astart, Yam, and Hadad.

The warehouses of Tyre were filled with produce.  The Tyrians themselves developed royal purple dye to trade in.  Tyre planted colonies across the seas to the west, including Atiq and Gadir.

It was Tyre that produced the famous Queen Jezebel, daughter of King Ethbaal.  Jezebel herself was the great-aunt of another famous member of the royal family: Princess Elishat of Tyre.  It was Elishat who founded the colony of Qart-Hadasht in the west, where she became Queen Dudu.  Noblemen from the city visited Tyre on pilgrimages to Melqart's temple.

Tyre for some periods in its history was ruled by a council of shoftim (judges) rather than kings, though the monarchy soon returned.  It managed to resist invasion by the Babylonians and Persians.

The Macedonians, however, were victorious.  Alexander the Great's army attacked Tyre and eventually destroyed the city, sparing only the temple. 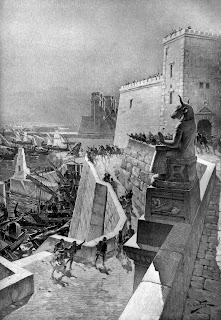