With the arrival of the new moon, the second month of Magmaru had begun.  On the night of the Chudthu festival, I gazed out of the window at Yarikh arising above the palm trees.  He was no longer old, but was now young, as if he had been born again.  This was the young and youthful Yarikh, the same god who had asked Khirkhib to marry Nikkal and who had went 'like a dog' under the table while Astart and Anat threw him meat.

On the actual night, I thought about the coming month ahead.  The coming dark season, the coming wet season.  The days were growing shorter and colder.  Soon the rains would come.  I had a pleasant Niqalu, and I prayed for the same with Magmaru.  I then poured a drink offering for the gods.

During the month of Magmaru I left my village to go to another town on a short break from school.  I stayed near the public baths, the park, an archery range near the forest, and the sea.  I found some time to worship Yam, as well as a large mountain god who stretched right along the coast, from the bottom of the bank near the park, right across to the harbour.  I ate some meals in a large inn, and also had the oppurtunity to go out on a ship.  It was wondrous to be out at sea to worship Yam.  I also prayed to Asherah while coming into port.  Along the way I spotted some dolphins (animals sacred to Asherah) which I saw as a sign that I was under her protection.  And while I walked throughout the whole town, along the streets and below the stone arches, I thought long and hard about philosophy and the nature of Yam as taught in the mystery schools of Berot, and in their school of thought.  I wondered- was philosophy native to Canaan (in particular Gubla, Tyre, and Sidon), or was it simply brought to Canaan by the Greeks from across the seas?  I thought of El, the father who gives his decree of order in the cosmos; and of Yam his son, who is chaotic and violent, primal and active.  Perhaps they were complementary forces?  Of course, it had to have been so, if El the creator gave birth to all his sons and daughters.  I think that if Yam descended from El, then perhaps it is an indication that chaos too has a role within the order of the universe.  But enough of my musings...

By the time the full moon arrived I was back at home and school.  With the Mlatu festival approaching, I once again decided to pray in the temple of Baal, as I had done before.  Once again, it was the large room I approached, passing below the arch, turning right and past the wall, going through the door holding a libation cup.  While I poured it upon the altar as part of a magical rite to bring rain, a sudden chill went down my spine.  I turned, and looked towards the door.  It was closed, but open slightly, and I felt an evil presence there.  Fear overtook me.  I was horrified.  And yet there was nobody there!  Of course, I realised that it was an evil spirit- a fear-demon (a kind of demon that causes fear).  Demons and evil spirits are, in my opinion, best described as things which are negative or terrifying- like fear, anger, certain volcanoes or storms maybe.  Of course, demons aren't always nessecarily malevolent.  Fear can be a force for good when it is used to make one flee from a hungry lion.  But this one demon was just trying to be malevolent by striking me with random terror.  It was then that I realised that the demon couldn't enter the temple.  It was a holy place, a house of Baal.  And Baal was here.  I turned, and thought of the power of the storm.  The storm which overcomes chaos and evil, which is enthroned in heaven as king over the earth.  This was the Lord Hadad.  I bowed before his idol and called to him seven times, for his might and power, that I might laugh in the face of fear.  My fear went away, of course, but I hastily finished the ritual and left the temple to go to bed after that.  The demon hasn't returned since, and I am thankful to the Thunderer- to mighty Baal the Lord of Canaan- for what he did that festival. 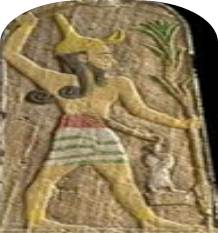