As we have seen previously, the primeval womb of the deep (Tahamatu) has given birth to heaven and earth.  But heaven and earth are not yet in their place within the universe.  That is where the younger gods come in.  Heaven refers to the sky, which El places above; and earth refers to the dry land, which El places below.  This represents the creation of the firmament, which holds back the primeval chaos and allowed dry land to appear.

From this we see that all things emerged from the waters, from the deep.  The firmament establishes law and order.  It holds back the chaos beyond.  So far we are seeing some similarities to Babylonian myth, with heaven and earth emerging from the deep.  In Babylonian mysticism, we see four elements to the universe: sky, wind, earth, and sea.  In this Canaanite myth, we see the seas and the wind (which inhabits the first heaven) coming first, and then the sky (the third and highest heaven where El dwells), and the earth emerges from below the sea.  So the universe is now ordered by El and the elements are placed into order, going (from lowest to highest: sea, earth, wind, sky).  Interestingly enough, fire is not yet an important element, being mentioned in passing as a discovery of Ur, Ec and Lehobah, who were primal deities.

How exactly El creates the universe is not mentioned in detail, however, if we go away from Berot and to Ebla, we find there a creation myth which mentions Dabar (Word).  Dabar is the divine word, which is spoken and things come to pass.  Words have magical power, and we also see this in Egyptian myth.  El perhaps speaks, and his words come to pass by means of either his children (the gods) or his servants (the angels of smoke, fire, and light).  The power of El's words are mentioned in the Epic of Baal: "Your decree, El, is wise; your wisdom is everlasting".  But this is from another creation myth from a different city, and so I will return once more to Sakkun-yaton.

The complex narrative describing the origin of the cosmos and God's creation now moves on to something else entirely.  We go to the idea of the divine family, and how El desires to attack his father with aid of another god (Taat or Nebo).  This is the idea of different generations of gods, of inheritance and how a son may overthrow his father.  By now several gods have been born to El and Asherah, and they also have a hand in shaping the universe.  And they too have children, and so on.

"And then were born children to the gods, Astart and Anat; and, by the advice of Anat and Nebo, El made a scimitar and a spear of iron. Then Nebo addressed the allies of El with magic words, and wrought in them a keen desire to make war against Shamuma in behalf of Artzu. And El having thus overcome Shamuma in battle, drove him from his kingdom, and succeeded him in the imperial power. In the battle was taken a well-beloved concubine of Shamuma who was pregnant; and El bestowed her in marriage upon Dagon, and, whilst she was with him, she was delivered of the child which she had conceived by Shamuma, and called his name Hadad."

Anat and Nebo urge El to attack his father.  Shamuma is overthrown, representing the younger generation of gods overthrowing the previous, older generation.  It is this younger generation that we worship most as they are our creators and have the most active role in the cosmos.  Parallels can be seen in Babylonian myth.  Now we hear that Shamuma had a concubine who was pregnant, and El married her to Dagon, where she gave birth to Baal.  This is probably an attempt by Sakkun-yaton to harmonize two accounts of Baal's birth: one in which his father is Shamuma, and another in which it is Dagon.

The text then goes on to describe the birth of various gods, who teach different things to humans.  It is the gods who created civilization and taught its arts to mortals.  As above, so below.  Order has now triumphed over chaos, and El retires from creation, handing it to the younger deities Baal and Astart.  But El is still very much lord, and his children do not overthrow him.  Nebo confirms him as lord over the cosmos.  We hear of various holy mountains, including Zapan, Lubnaan, Hermon, and Martu. 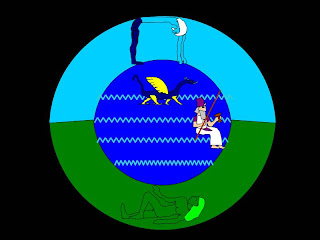