Inside an ancient Canaanite/Israelite house

The house, or bet, is the home of the Canaanite, and is his/her dwelling.  But it is more than that.  It is where the family gather, it is shelter from the dangerous world outside, it is protection, it is the place of leisure, and it is the place where the household deities and personal deities are worshiped.

In ancient times, the house was made of mud-brick and was flat-roofed.  For a poor person or a commoner it would be one or two floors, with a few small rooms inside.  Inside it would be very crowded.  For a wealthy person, a house might be large, with a massive garden area.  The ideal family was large, consisting of four to eight people.  An extended family, called the bet-ab (father's house), consisted of the father and mother, the sons and their wives, and the children of these sons.  The sons might build a small dwelling around the central courtyard, so there would be several buildings surrounding one courtyard, with one large family living in them all.  Though, of course, this wasn't always possible.  For the wealthy family there would also be small chapels for various gods built throughout the house, and the slaves' quarters.  The slaves would often do tasks like tending to the garden, which might have several trees (like tamarisks and date palms), or to the vineyards and orchards (which might be planted within the garden).  The slaves would often live in families with their own children.

The father of the family went and worked in a specific trade for a living.  He would work from sunrise to sunset, and he would spend much of his time in the public sector (working, taking part in temple rituals, speaking to the council, joining specific guilds or societies associated with his trade, and so on).  He might also spend some time in the tavern on the night.  When at home, the father was the head of the household and of all the younger generations.  The mother stayed at home, weaving, cooking, cleaning, and performing domestic chores.  She also raised the children.  Women were mostly restricted to the private sector and spent most of the time at home (and when she left the house she was usually with her husband), however, women did have more rights than most other nations at the time.  Women could work (though they were usually given lower-paid jobs, such as weaving in a textiles factory), could divorce, could take matters to court, and could sell and trade in goods.  The mother was also to be highly respected by her children (in some ways, one could argue, more than the father).  The son would stay in the house for his first few years, then he would enter into his father's trade and become an apprentice to his father.  If he was wealthy (and wanting to become a scribe) he would go to school instead.  The son aided his father in rituals to the gods, washed his father's clothes, held his father up while he was drunk, and plastered the roof of the house against leaks.  The daughter never went to school or work but stayed at home with the mother.  She fetched water from the well, looked after the food supply, and was gifted in divination and astrology.

The Canaanites also built apartments in large cities, which were houses built on top of one another, and connected by a stone staircase running up one side, where the doors to each floor would be located.

The houses of ancient Canaan and Israel were very similar. 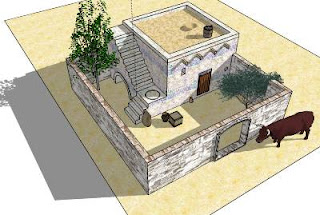 A house would have a front courtyard, where the animals might be kept.  It would be walled or fenced. 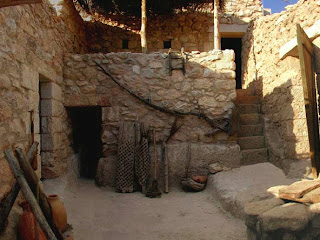 At the bottom of the courtyard or garden would be the entrance to the family tomb, which was under the house (in the underworld, or the house of the dead, where the shades of families went after death). 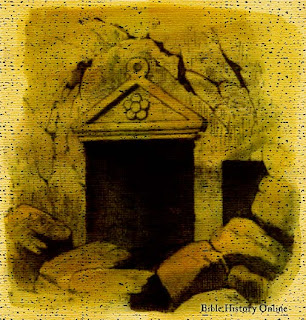 The door would open into the kitchen on the bottom floor, a small room where the food was cooked and prepared.  A small cooking fire would be prepared, and stones for grinding grain.  Next to this room would be a room for storing pots and bowls on shelves. It would be important to store extra food, as the climate of the Near East is actually very chaotic and not always consistent.  Sometimes the winter rains would not come (and so nothing would grow) and would come instead in the middle of summer, causing floods and storms.  Poor harvests could be as common as one in every four years.  To the other side would be a small stable area with a paved floor, where a sheep or goat might be housed.  Meat made up a small part of the average diet in those days, with it being mostly consumed during festivals when large animal sacrifices were common in temples.  Instead, the animals were more often used to provide milk and dairy products. 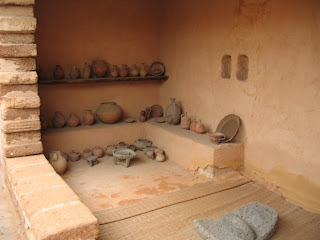 A ladder or flight of stairs would lead to the second floor.  Upstairs would be the leisure area.  This would typically include space for living and entertaining guests.  In this leisure area the family would keep themselves entertained by telling stories (including traditional legends of the gods), playing music, dancing, and playing board games and dice games.

Space for sleeping would be located at one side of the upstairs area.  In more elaborate homes, the wealthy had their own bedrooms (including a small bedroom/nursery for the children) and larger beds in the manner of those of the Egyptians.  But for the average commoner there was some space where they would lie with blankets.  A ladder would lead onto the roof, and in the summer the family would sleep on the roof to keep cool.

The dining room area would be upstairs, and would be most likely in the centre, as it was where the family gathered for meals.  The family would sit on the floor and share the same food.  Bread would make up a large part of their diet, as would cereals of wheat and barley during autumn, winter, and spring.  In the summer, fruit and dates would be common.  Meat would be consumed during festivals and on special occasions.  Vegetables were not very common in the average person's diet (as the country is hilly and very few people had artificial vegetable gardens), and were mostly eaten by rich people who had small vegetable gardens planted near their homes (the most common types included leeks and onions).  For drinks, people usually drank water and wine. 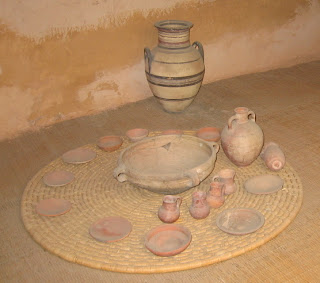 The women would spend their days here, where they would weave and create textiles using a loom.  This was a daily activity, and used to create clothing. 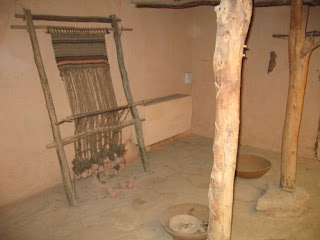 At the very far end, located in the wall, would be a small cultic area.  This would be a small household shrine or altar, dedicated to the family Teraphim (household gods).  Asherah often appears among these deities, though most were personal and unique to the family and clan.  People also conducted house worship here (I will write more on the differences between house worship and temple worship in another post, though it is mostly the same as in other religions like Kemeticism, Hellenismos, and Hinduism).  This area would include oil lamps and incense.