(I'm using Semitic terms for people and nations here, including Sapan for Iberia, and Phut for Libya/North Africa).

Hannibaal, or Channibaal (the 'ch' is pronounced like the 'ch' in 'Channukah'), was a very famous Canaanite warrior.  This is the first part of his story.

Hannibaal was a member of the Bariq clan (umatu).  This was a family of wealthy aristocrats, who were also great warriors.  They lived in the city of Qart-Hadasht, a colony of Tyre, which was in Phut (North Africa).  According to legend, the family of Bariq was descended from a younger brother of Queen Dudu, who founded the city and was its first ruler.  If this was true, it would make Hannibaal a descendant of the kings of Tyre, and of noble blood.  His father, Hadmelqart, was a powerful general in the army; and his mother, Dudubaal, was a Sapanite (Iberian) princess.  Hannibaal had several sisters and three brothers, two of which were called Hasdrubaal and Magon, and they had military careers like him.  He also had two brothers-in-law, one of them called Hasdrubaal, and another being a Numidian chieftan called Naarbaal.

Qart-Hadasht had already fought one war against Rome, and had suffered a defeat.  Losing some of its empire, the city hoped that Hadmelqart would conquer more territory in Sapan (Iberia).  A young Hannibaal, aged nine, went with his father to the Canaanite city of Gadir in Sapan.  In a temple of Baal Hammon, his father made him swear by the gods of Qart-Hadasht to forever be an enemy of Rome.

Hannibaal went with his father, conquering the Sapanite tribes to expand Qart-Hadasht's territory.  His father drowned in battle, and his brother-in-law Hasdrubaal took over as general, leaving Hannibaal as an officer below him.  Hasdrubaal signed a treaty with Rome, and the Romans promised to never cross south into Sapan, into the territories of Qart-Hadasht.  Hasdrubaal also arranged a marriage between a young Hannibaal and a Sapanite princess named Imilkat.  During these years, Hannibaal returned home to Qart-Hadasht.

Eventually Hasdrubaal was killed by a Celtic assassin, and Hannibaal was announced as general.

One of General Hannibaal's first amazing feats was the siege of the Greek-Sapanite city of Saguntum, which allied itself with Rome and began attacking allies of Qart-Hadasht.  Hannibaal led an army against the city, which began to request aid from Rome.  None came, and Hannibaal destroyed the city.  The Romans then announced war upon Qart-Hadasht, and the second war began.

Hannibaal returned home to Qart-Hadasht and managed to get permission from the ruling council of the shoftim (judges) to raise an army and return to Sapan, where he would begin his attack on Rome.

Hannibaal went on a brief pilgrimage to Gadir, where he visited the temple of Melqart.  The night before his departure to war, he had a strange dream.  In it, a ghostly youth, a divine messenger of Melqart, appeared to him, telling him to go forth and destroy Rome. 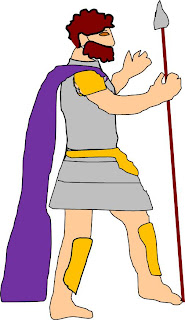