"There is, too, another marvellous portent in the region of the Gebalites. A river, flowing from Mount Lubnaan, discharges itself into the sea: this river bears the name of Adon.  Every year regularly it is tinged with blood, and loses its proper colour before it falls into the sea: it dyes the sea, to a large space, red: and thus announces their time of mourning to the Gebalites. Their story is that during these days Adon is wounded, and that the river's nature is changed by the blood which flows into its waters; and that it takes its name from this blood. Such is the legend vulgarly accepted: but a man of Gubla, who seemed to me to be telling the truth, told me another reason for this marvellous change. He spoke as follows: 'This river, my friend and guest, passes through the Lubnaan: now this Lubnaan abounds in red earth. The violent winds which blow regularly on those days bring down into the river a quantity of earth resembling vermilion. It is this earth that turns the river to red. And thus the change in the river's colour is due, not to blood as they affirm, but to the nature of the soil.'  This was the story of the Gebalite. But even assuming that he spoke the truth, yet there certainly seems to me something supernatural in the regular coincidence of the wind and the colouring of the river."-- From 'The Syrian Goddess' by Lucian of Shamishat

Note on the author:  Lucian was a satirist writer who came from the Kingdom of Kummuhu, a former Assyrian area now under control of the Roman Empire.  He was born in the city of Shamishat, a city which included notable Assyrian and Greek communities.  Lucian wrote in Greek and used Greek names in his works, but he often refers to himself as 'Assyrian' and 'barbarian', making it likely that he was an Assyrian by birth and not from the city's Greek populance.  Lucian wrote pleas for people in court, which is what he was best known for.  He became famous for travelling through Greece and into Rome, then into the lands of the Celts.  Lucian is also known for writing much on the gods and the legends of the gods in Assyria and Canaan, where he travelled.  This particular work is about worship of the goddess Astart in Canaan.  He also wrote fictional novels about voyages to other planets.  He died in Greece. 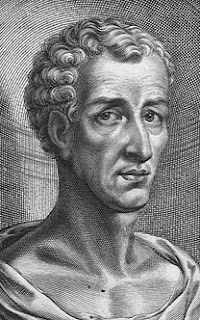 Email ThisBlogThis!Share to TwitterShare to FacebookShare to Pinterest
Labels: quote