Ashuru Ari is fast approaching, and Shadrapa and Melqart are two gods I worship on this festival.  So I thought I would do a deity post on Shadrapa as he is a god who isn't as widely known these days as some of the others.

The god Shadrapa was first worshiped by the Arvadites, in their island city Arvad and especially on the mainland, in the twin city of Amrit.  The cult of Shadrapa was widespread among the Arvadites, though it also spread to the Tyrians.  His cult became paired with that of Melqart.  When the Tyrians travelled west over the sea to found new colonies, they brought the worship of Shadrapa with them.  His cult was found in cities in North Africa, including Atiq and Qart-Hadasht.  It was most widespread, however, in the city of Lapqay.  Shadrapa was identified with Dionysos and Liber Pater/Bacchus.

According to legend, Shadrapa was born on this earth as a saviour to mankind.  When a great drought came upon the land in summer, it was he who wandered the earth and taught man how to make wine.  But wine was also a sacred drink of the gods, with mystical properties, which is what Shadrapa's mystery cult focuses upon.  Shadrapa first went to Egypt, where the land was too hot to make wine, bringing it with him from Canaan.  He then went to Greece and taught the Greeks the use of wine, though when they tried to make it themselves without his aid they said they preferred his own, and so returned to the Canaanites for more.  After travelling the world and teaching his method of salvation, Shadrapa became a god and joined Melqart.

Shadrapa is a god of wine, salvation, nature, fertility, healing, and theatre.  He is the creator of wine, and master of its sacred properties.  He is a saviour of man, and a lord of fertility and healing.  A benevolent and kindly god, Shadrapa is known for his wisdom and his youthful nature.  He is a tamer of animals and lord of nature.  As the god of the theatre, ceremonial plays involving the wearing of ritual masks have a kind of shamanic power and are sacred to him.  He is beardless and young.  He holds a snake and a scorpion, and sometimes holds a lion by its tail, showing his power over nature and ability to protect his devotees from evil.

He shares his festivals with Melqart, as the two are worshiped together, and his worship involves his image being carried in small portable shrines, the drinking of wine, meditation, and ritual games and plays being held in his honour.

Pray to Shadrapa when performing, needing protection from nature, in need of renewal, and thank him for his gift of salvation. 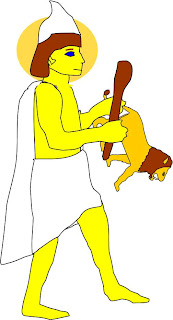